Following up from my Unusual Encounters post, where the main idea is to actively document weird sightings and strange experiences I have for your eyes another image. 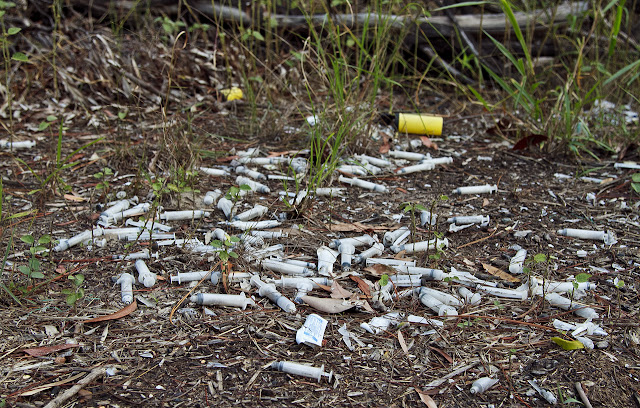 This sighting had me particularly shocked.
Whilst out hunting for spots to ride and maybe a cheeky 4by action on the side of the road on an overcast gloomy Sunday, myself and Brenton came across this dumpage of  hypodermic syringes.
We traveled down a very un-kept road. On one side of the road was a large "farmsih" looking property that had horse jumping obstacles for show jumping practice throughout the property. On the other was a one meter high barbed wire fence surrounding what seemed like bush land. When we traveled further down, the road turned to gravel. It was clear this was a no through road known well to some people as there was evidence of many burnouts and a ridiculous amount of illegal dumping. We decided to follow the now gravel road to see what could be down there. Weaving through the bush we discovered this gravel road was used to maintain a high pressure gas line that was constantly thrown in our faces by large signs that said no digging because of these lines. The track began to get a hell of a lot more off roadish and we continued down to a bit of a clearing in the woods. From a distance the scattered plastic syringes looked like shattered glass but on closer observation, BAM needles.
Shit was creepy as fuck, but I got this image and then we turned around and headed back as the track seemed to end.

On a much lighter note here is some of my fav videos to debut on the web recently!

If you keep up with your BMX interweb you would for sure have seen this insande edit featuring Colt Fake and Trey Jones going ham on the monster ramp!
Watch it again!

I was pretty excited about The Avalanches returning with some new music ever since I used to get ripped as a Freddy Kruger victim and listen to frontier psychiatrist on repeat! Diggin the new tune!