People seem to be enjoying my shitty diatribes about completely random shit which I really appreciate, it's cool that other BMX dudes (and people in general) are interested in the same shit as us fella's here on the blog, especially seeing as how between me, James and Simmo we're all into pretty different types of stuff! Now where I'm going with this is that I'm not a super trendy dude, the only shirts I own came from target or Chronic Bone's web store. For a while now though I've noticed that untrendy is super trendy? Every party I go to (not that many honestly) it seems like the more of a wacky freak you are the more people treat you like you're a mad trend dawg. I was at a Halloween party this year and a chick was decked out with a bunch of shopping bags and a lobster hat, between chuggin a ciggie and rolling so hard the chuppa-chup she was holding was practically melted to her face, she managed to explain she was consumer crab. She dressed as consumerism for Halloween. In my mind that is a fucking excellent costume but it's not exactly the sort of shit I would have thought most people would get into. I have also noticed that the long hair thing is getting real big. Generally I look like I'm doing my best impression of post big-night-out oscar the grouch (please don't get me started on how he's not homeless he's just a shameless pot head)., the more filthy and pissed off I look the more excited people seem to be when I arrive anywhere? And it's the same with girls, working in the city I notice the lady trends too, like dressing like the lead singer  of My Chemical Romance but with more piercings. Before you get too far assuming this is another big salt fest, I actually love this shit. It's awesome that grimy weird is becoming more and more acceptable and it's even better still when guys like Erik Elstran get some recognition for deadly good riding and just being a freak! I spotted his new seat and I'm already lining one up for next payday! Check it: 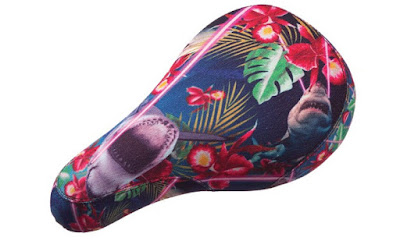 Sharks with frickin lasers!
This big ass photo of Calvin Kosovich's trendy face sucked me straight into this story. Last week I had a bit of a froth on Cooper Brownlee well this week it's another seriously good Aussie BMX dude. The unusual structure of this interview is pretty entertaining and Calvin has some interesting stories to tell for sure. Click the image to head over to Defgrip and check it out. Finally, this here video just got me super keen to jump on my bike and ride. I love when you get a little bit of an insight into what makes guys who basically ride as a full time job still want to get on their bikes and have fun. Tyler Fernengel is quite a young dude but he doesn't seem to be the completely egotistical dick that a lot of other young pro's turn into when people start paying attention to them. I'm well jealous of the opportunities that lie ahead of this fella but it looks like he's putting them to good use, and most importantly he's having a shit load of fun!

Don't take yourselves too seriously and stay TRENDY!